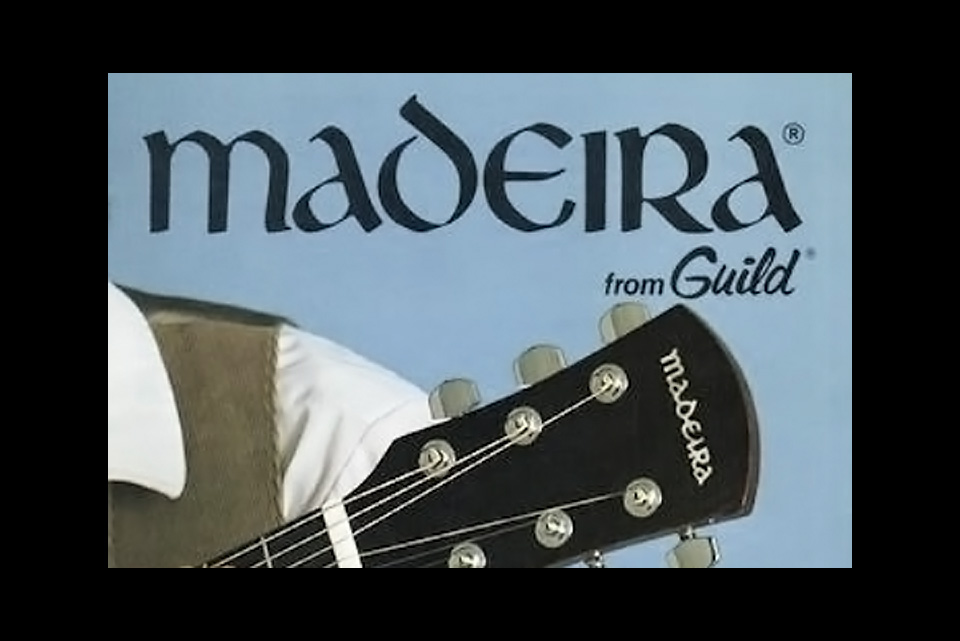 This Madeira by Guild acoustic guitar article presents a compilation of historical information and date estimates along with quality and value speculations.

Much of the information in this article is offered without any tangible proof.  Still, it represents a synthesis of the best information the web has on Madeira by Guild.

Madeira was an import-line by the legendary guitar manufacturer Guild.

Good quality American made guitars are expensive. And, there are a large number of beginner and/or budget-minded guitarists who are simply priced out. To capture a share of the budget market, many American manufacturers have a separate, more affordable line of guitars. Since production of these guitars is offshore, where labor is cheaper, they are sometimes referred to as import-lines. It is worth noting that import-lines might also include some fairly expensive guitars.

Typically, import-lines are sold under a different label from their American counterparts. For instance:

Definitive historical information about Madeira by Guild is scarce.  Especially in regards to original materials with printed dates, etc…

MadeiraMan on collectorsweekly claims he bought his Madeira in 1970. The book Guitar Stories: The Histories of Cool Guitars by Michael Wright says that Guild introduced its Japanese-made Madeira guitars in 1973. However, he also states that, “it’s not known how long the Madeira acoustics lasted, but quite possibly through the ‘70’s.”

This latter concession by Michael Wright alludes to the limited nature of definitive information on Madeira. At least one online source references a price sheet (2182-D) with a date of March 1, 1982. Furthermore, the Faas Corporation supposedly discontinued the Madeira line shortly after purchasing Guild in 1988. 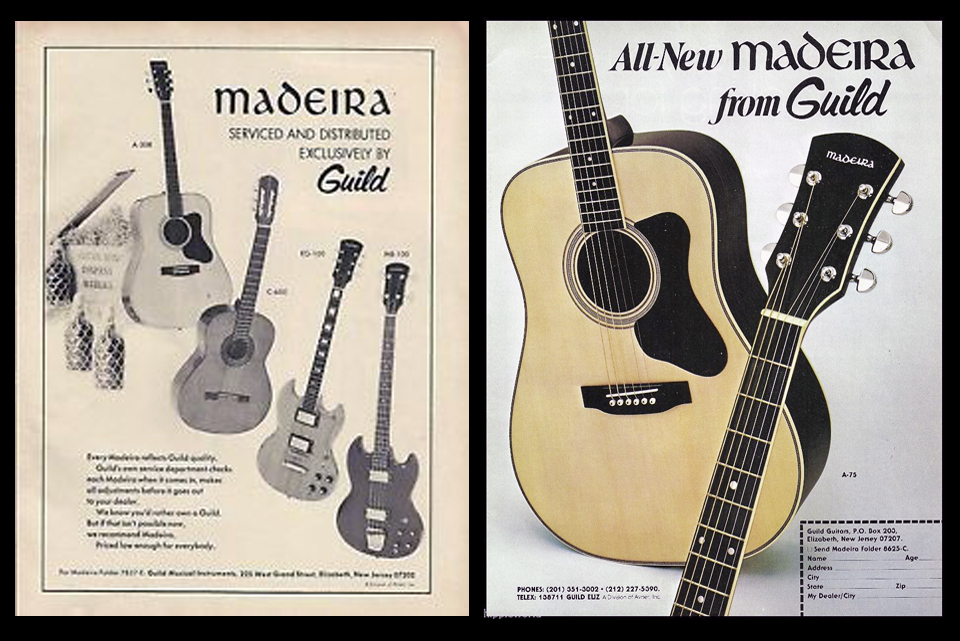 The guitars were first made in Japan based on existing Guild designs.  Kasuga probably build the Japanese versions. Kasuga was one of the oldest stringed instrument manufactures in Japan (open approx. 1935 – 1995). The quality of guitars built by Kasuga was very good.

Production later moved to Korea.  Legend has it that the Japanese workshop used pre-machined materials that were made in the USA by Guild.  There doesn’t seem to be a consensus regarding those assembled in Korea—maybe some used materials from the US, maybe not.  Needless to say, the Japanese versions are preferred. 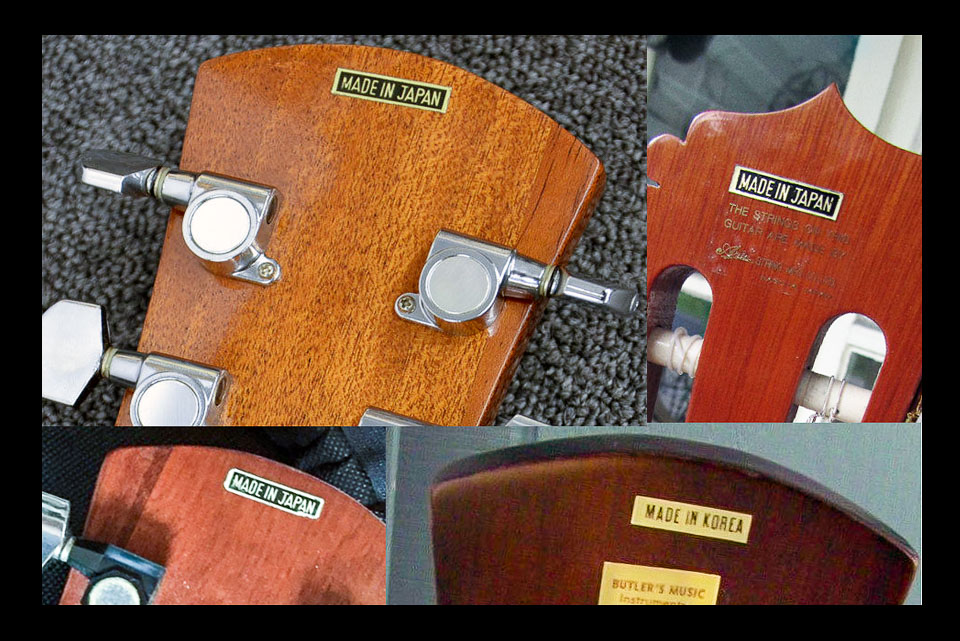 The gum-labels “Made in Japan” or “Made in Korea” are usually missing. 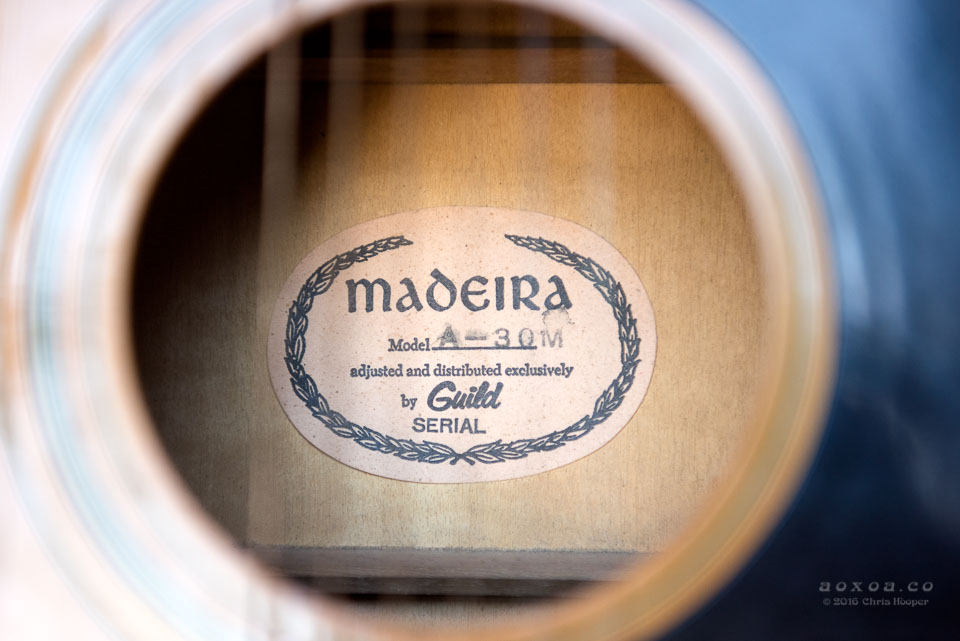 Made in Japan version with oval label. This A-30M guitar had a curved-top headstock.

Some Korean imports also have an oval labels that have “Made in Korea” printed on it.  Some square labels said assembled in Korea.  Both of the examples below were from Korean imports that featured a double raised or “bump on a bump” headstock-top. 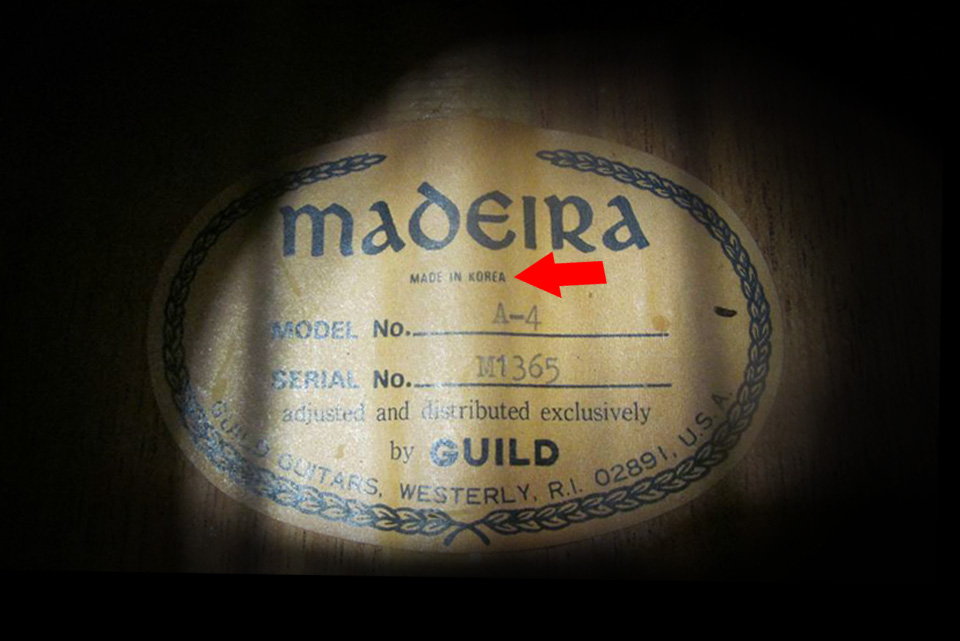 An oval Label with MADE IN KOREA printed on it. 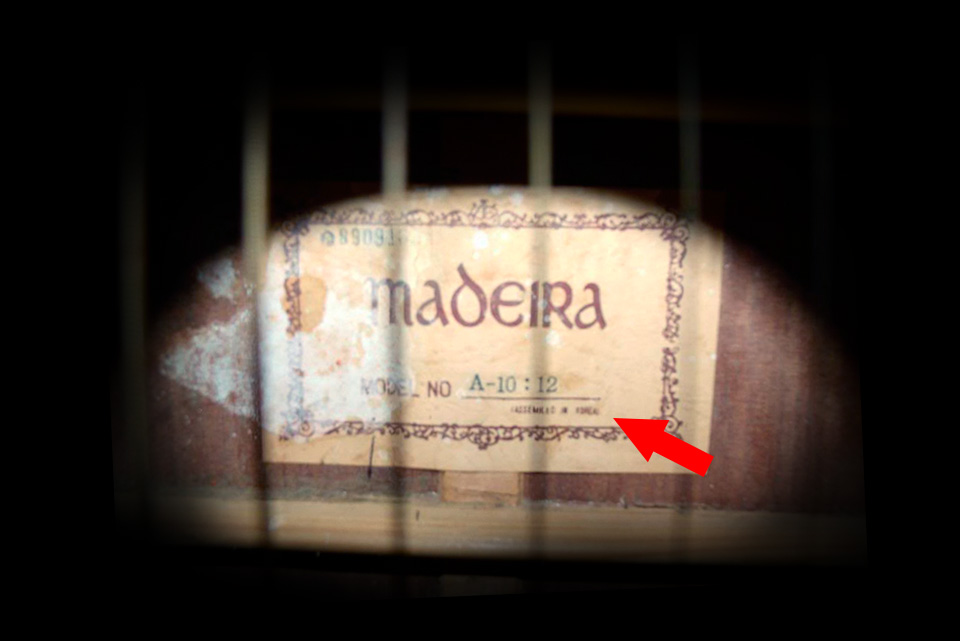 The prefix indicates the type of acoustical guitar:

Generally, the series number that follows the prefix increased with the quality and price.

The suffix, when present, indicates the type of wood or finish:

Determining the exact age of a Madeira by Guild guitar is difficult unless you have an original receipt.  It is relatively certain Madeira was in production from the early ’70’s to early ’80’s. And, according to Michael Wright’s book, the Madeira name was also resurrected in the early ’90’s. 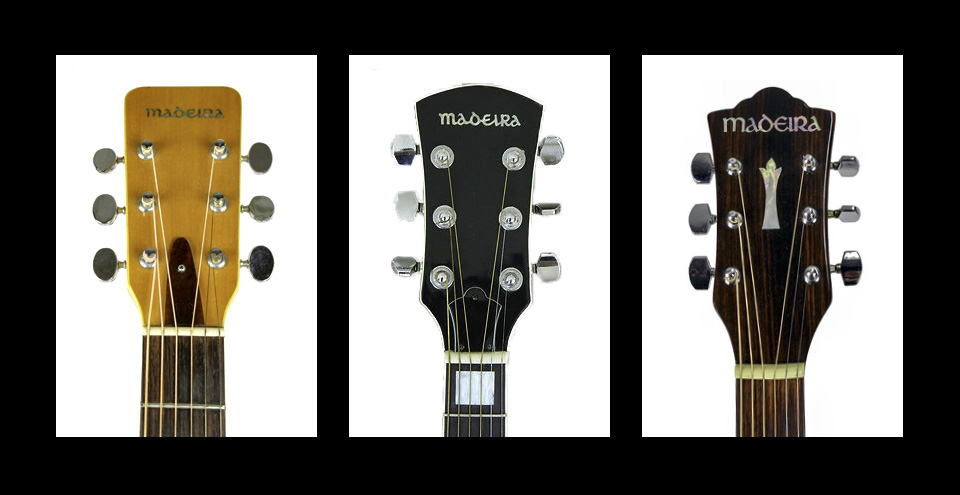 All early Japanese guitars have the flat-topped headstock. The book Guitar Stories: The Histories of Cool Guitars displays a Madeira ad from the summer of 1974. The ad shows an A-30M with a flat top. A catalog, reportedly from 1975, shows that all steel string acoustics featured the curved top. The same catalog shows that all classical guitars feature a double raised or “bump on a bump” top.

Speculations abound that assembly moved from Japan to Korea in the 1980’s. Quite possibly, the switch to Korea happened around ’79 or ’80.

Quality and Value of Madeira

Most people overlook Madeira even though they are good quality.  Often times they are an incredible bang for the buck.  The quality depends on who you ask, model series, country of origin and how much it was worn down, cared for, or upgraded. 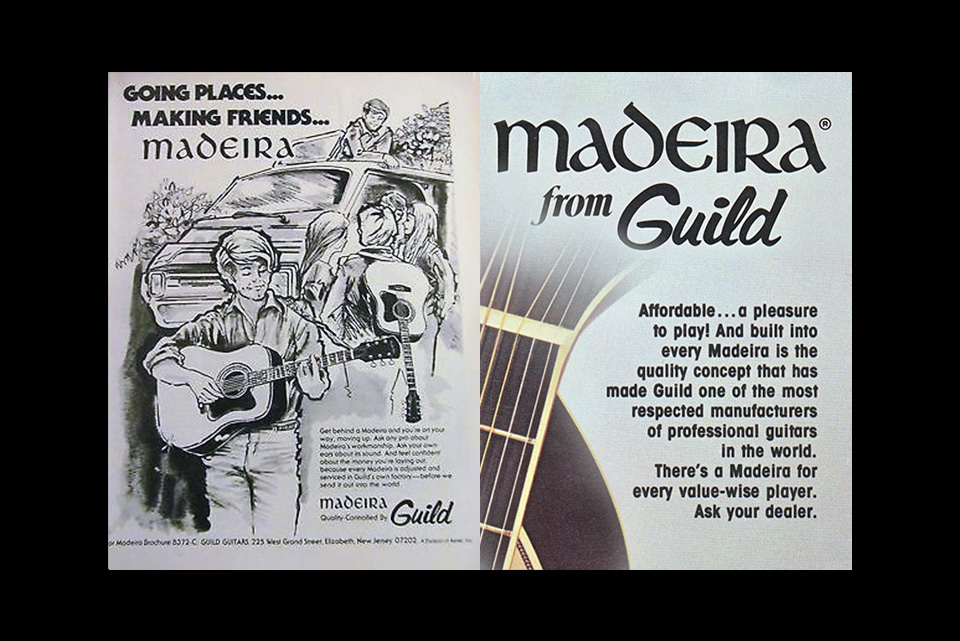 “Madeira, Quality in the Guild Tradition: If you’re looking for a moderately priced instrument you can be proud to own, look at Madeira first.”

“They all had one thing in common though: they sucked. We sold a lot of them to people unable to afford a Guild. The guitars were Korean-made, long before Korea got their act together as guitar makers… The really low-end acoustic was the A-1.” -Posted by Drumbob.  Source.

“The Madeira is a fine instrument that will last a lifetime if taken care of. Very close to the USA Guilds…NOTHING sold in today’s market for under $1000 will compare with a 70s-80s Madeira, Epiphone, Yamaha, Hondo, Alvarez, or Suzuki. My 35 years of guitar experience knows this to be true.” -Posted by Bill.  Source.

“I owned a Guild Madeira in 1976, my first guitar, and it was pretty much a terrible instrument in every way I can think of.” -Posted by Billgennaro. Source.

“For sound and tonal quality as well as playability the upper grade Madeira’s are definitely comparable to Gibson, Guild and Martin models that cost well over $1,000!” -Posted by Wyzrdofahs.  Source.

“Having repaired several, I offer this as hopefully a way to save you some bucks: If it’s more than $100, don’t waste your money” – Posted by Terry Allan Hall. Source.

“…darned good entry level guitar… It was seven years later, when I bought a Guild GF-55, that I finally had a guitar good enough in tone and playability to adequately replace it.” -Posted by JTFoote. Source. 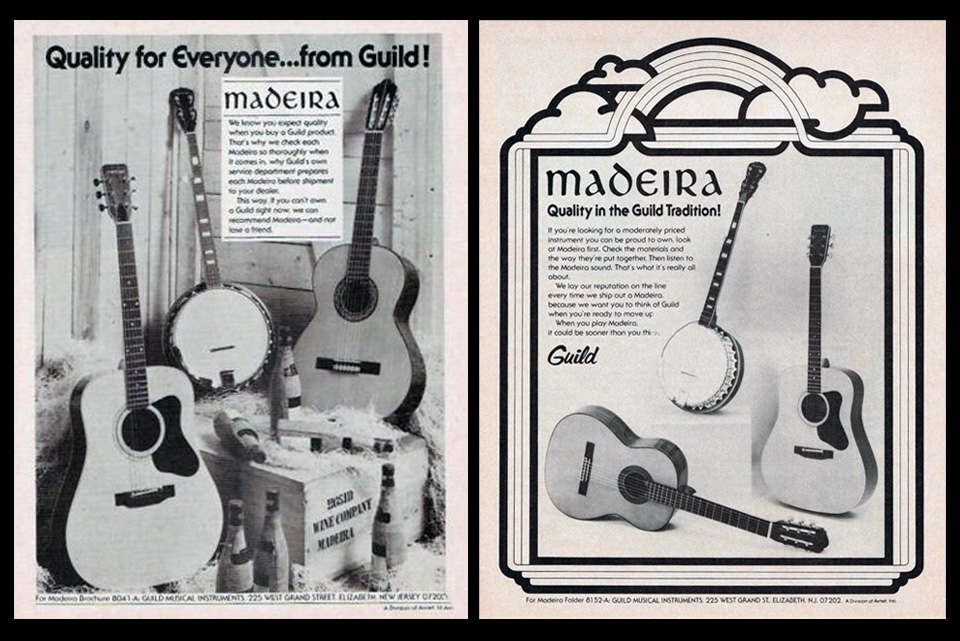 “We lay our reputation on the line every time we ship out a Madeira, because we want you to think of Guild when you’re ready to move up.”

Are Madeira by Guild Solid Body or Laminate?

Laminates are generally regarded as undesirable in an acoustic top because laminates inhibit resonance.  Still, there are some acoustic builds that defy the “tone-killer” rule.  The inner ply of Madeira laminates could be solid poplar, soft maple, larch, or alder.  The woods Guild used for lamination back in the day certainly were not low quality composites.

The Madeira by Guild 1975 catalog does not specifically state whether or not a top is laminate—that goes for the sides and backs as well. For example, the A-30M states “Natural spruce top” and “Maple sides and back.”

Does the word “Natural” mean solid and when “Natural“ is not used it means laminate?  Probably not.  Typically, guitar manufacturers specify when solid wood is used. The “Natural” designation could indicate the inner ply is not a cheap composite material (i.e. all three plys in the laminate are solid wood).

It is safe to say that most Madeira guitars used laminate tops unless the suffix of the model designation ends with the letter S.  As stated previously, the S at the end of the suffix designates a solid spruce top.  There are reports (here and here) that back this up by stating the A-30MS had a solid top. Hans Moust even said that model A-12AS featured a solid spruce top.

Terry Allan Hall said he came across some where only the rosette was solid wood.  He probably saw what Madeira calls a “semi-solid” spruce top.

Solid tops are easily identifiable by examining the edge of the sound hole. The wood grain will travel to the other side if the wood is solid.  Sometimes, as is the case with my A-30M Madeira, identification isn’t easy for everyone. 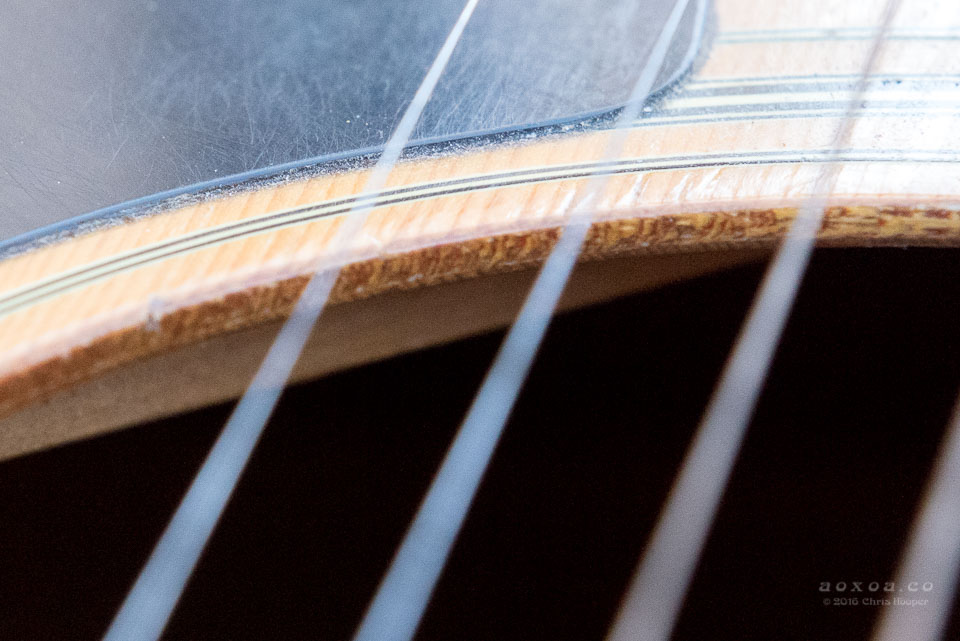 This A-30M appears to have grain-lines going down although it is laminate.

Determining if the sides and back are solid is a bit trickier. A laminate can have thin sheets of tone-wood veneers on either side. The result can be perfectly matched grain, inside and out. Therefore, laminate guitar sides and back can look like solid wood.

Here is the trick: solid wood sides will usually have internal bracing. If it lacks vertical bracing going up the sides, it is surely a laminate. Note: Even on laminate sides, you will see vert-pieces at the neck and front because those are joining pieces, etc… If it does have solid wood sides, the back is most likely solid as well.

Knowledgeable guitarists on Internet forums say all Madeira’s have laminate sides and backs. 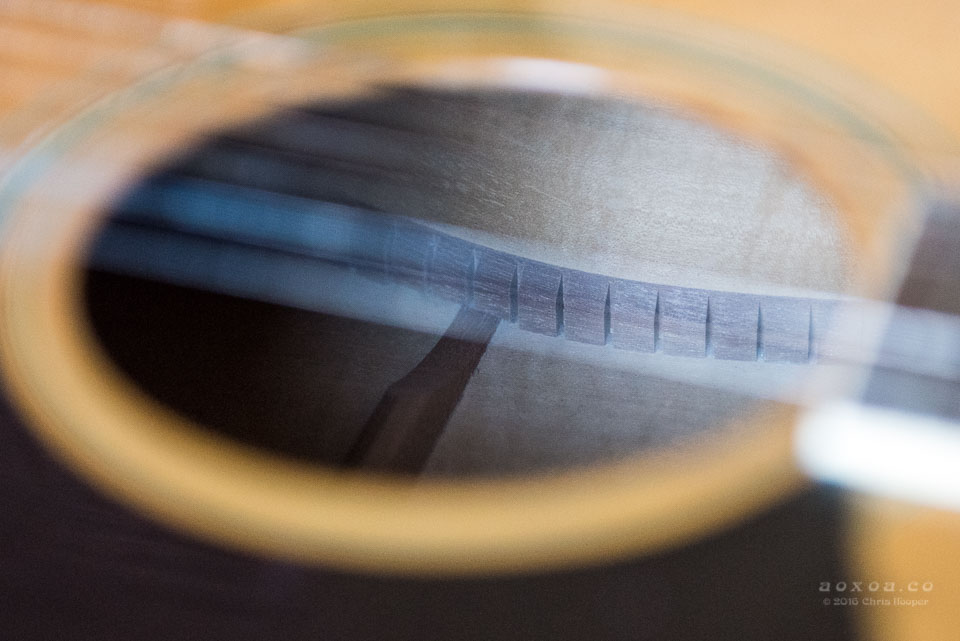 No vertical brace in this image. Shine a flashlight in the soundhole and examine the sides. On a laminate, the only vertical braces you might see are at the neck and front positions.

How much did they originally cost? 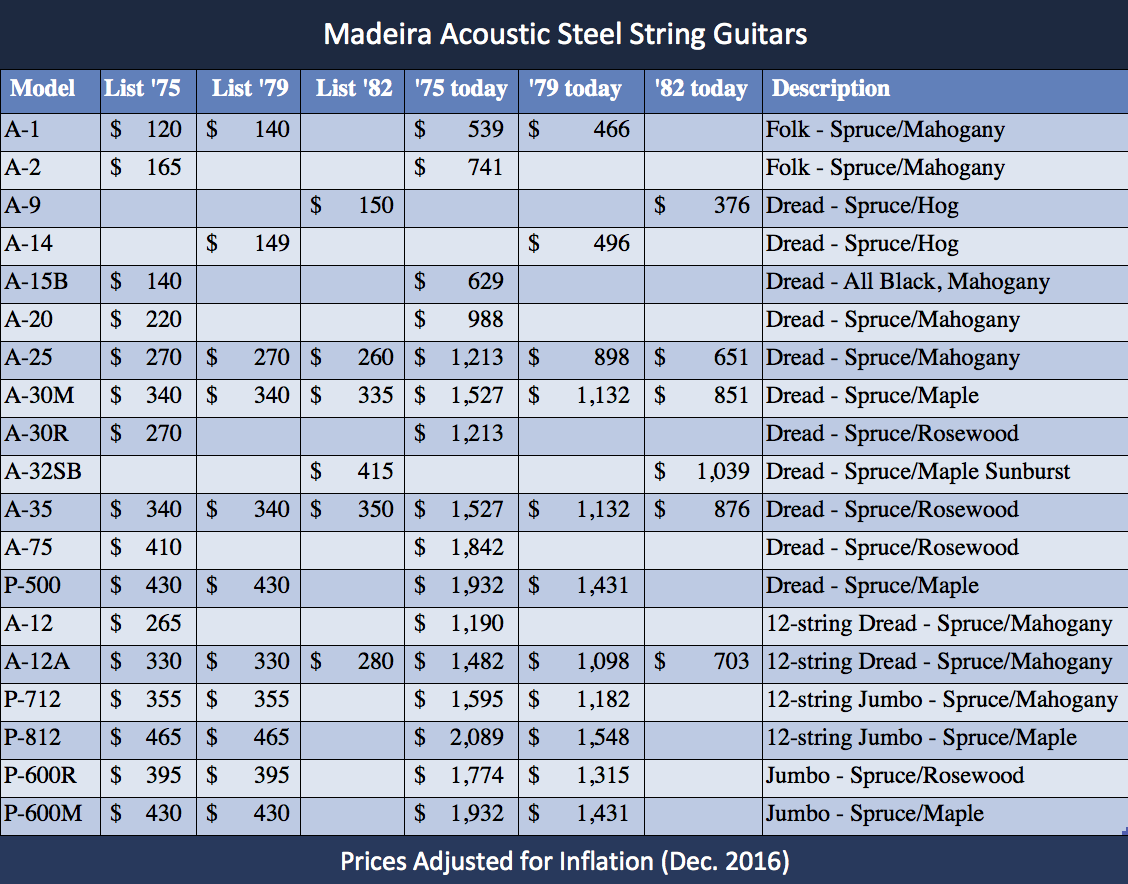 Data compiled from musictoworshipby and a catalog with a purported date of 1975.

How much do they sell for today?

Yes, they are rare and they are Guild’s import line. However, don’t expect the “rare” factor to increase the price, cost or value. It is not rare in that way.  Madeira by Guild guitars sell for, and are worth, whatever someone is willing to pay.

Many knowledgeable guitarist would howl at an A-30M priced at $500.  Others say a good A-30M (one with minimal fret wear, clean body, etc…) is a grab at $200-$250.  According to limited data on the Internet, most A-30’s sell for between $100-$200 and sometimes that includes a hardshell case. Bargains for beaters or scuffed-outs fall between $50 and $100.  You’d have to adjust accordingly if your Madeira is a lower series than the A-30. 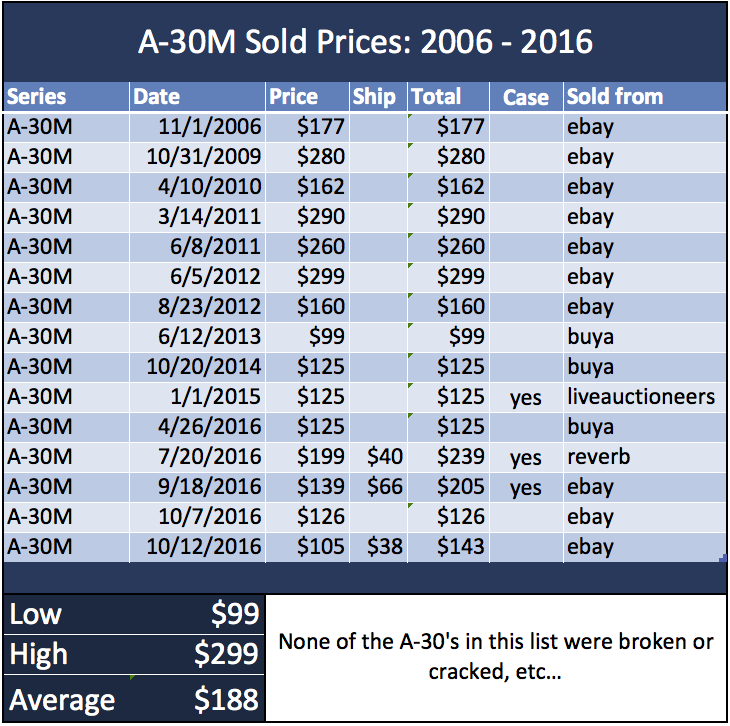 I have heard that you should treat an A-30M like an $800 guitar, even though you may have bought it for $200 with a case. Basically, you can find good quality Madeira by Guild guitars that are an incredible bang for the buck.  Or, maybe you get one that is terrible. 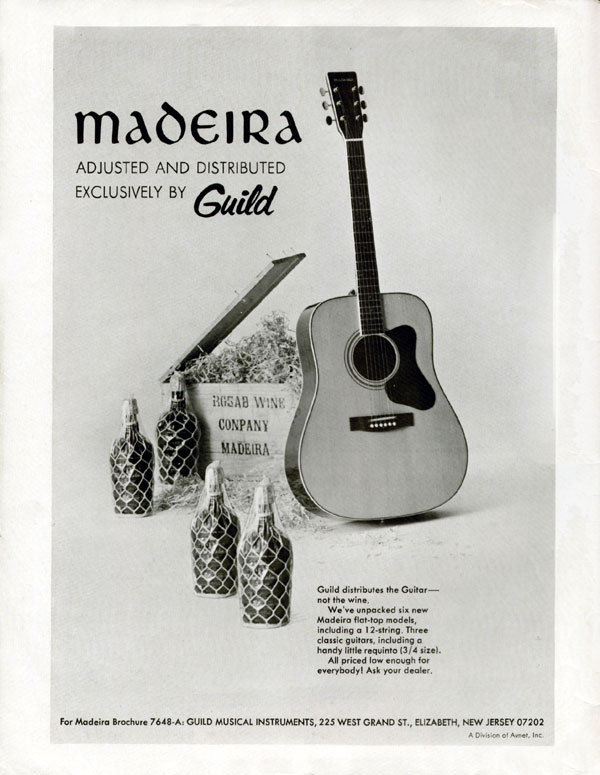 Vintage Guitar and Bass claims this is a Madeira by Guild ad from 1972.

You are encouraged to share this article by clicking one of the share buttons.  Thank you for reading.